Think of the ripple effect that can be created when we nourish someone. One kind empathetic word has a wonderful way of turning into many.

This is a post from my lovely, hilarious baby sister, Shelb. It’s an honest testimonial about how she’s taking back control of her health, body and mind by nourishing it with real food and nutrition. I couldn’t be more proud of her and her efforts on this journey, having just hit her 90 days paleo – cold turkey! She’s proof, that what you put in your body, matters as much as anything. Here’s her story.

I don’t even know where to start. I have so much to say and I have so many ideas running through my mind. I have always struggled with food and what is “right” or what is “healthy,” but at this point in my life I have finally found what is “right” and “healthy” for me. I was always so skeptical, because I was in denial and was making every excuse I could in order to continue eating unhealthy. I think that me saying I was skeptical was actually just my excuse for not starting this journey earlier. I wanted to be able to run to McDonald’s and order off the dollar menu, I wanted to be able to order pizza delivery any night that I didn’t feel up for cooking (which is every night), I wanted to smother everything in processed cheese slices and make a sandwich out of everything, but most of all I wanted the satisfaction that eating those things use to give me. I got to the point where I was literally in love with the food that I was eating- I was so addicted to the feeling that I got when I was eating those things. It was easy, cheap, and convenient, and tasted oh so delicious. Granted, after eating those things I wouldn’t feel the best, but I shrugged it off and figured that was all part of the digestion process.

Something else I have always struggled with is my migraines. I say “my migraines” instead of “migraines” because those puppies were personalized. It was like every single migraine I got was the exact same- out to get me, completely debilitating, and unable to be cured by over-the-counter pain killers. I experienced migraines throughout my college years and into the years after. I tried home remedies, every single over-the-counter pain killer ever made, I tried going to the doctor about them and was prescribed an anti-depressant that also helps with pain (umm, no thanks), and I tried anything and everything else in the book to help prevent or cure my migraines and nothing did the trick.

I think my breaking point was this year- much of the entire year up until September actually. I was rushed to my local urgent care by a co-worker due to a migraine, had to call in sick due to migraines numerous times, I was always so exhausted and worn out, never had any energy, I had absolutely no sex drive, I had a very large appetite all of the time, I could eat from dawn to dusk and not feel full or nourished, I was starting to not fit into my clothes, all my jeans were cutting off my stomach circulation, I was developing quite a large muffin top, when I laid down on my back my stomach didn’t go down- it just stayed there bloated and hard, my feet and ankles were constantly swollen, I had joint pain in my knees and my feet, my skin would break out often, my nails were thin, brittle, and peeling, I had major gastrointestinal issues that I also missed a few days of work for, I was diagnosed with irritable bowel syndrome, tested for celiac (it was negative), and constantly at the doctor for this or that because I was ALWAYS sick.

While in college I went through a capstone class that taught about the value in eating organic locally grown produce and grass-fed meat, so I was educated in that area, but I still had a very bad attitude about changing my entire lifestyle. It wasn’t until I started doing my own research and talking extensively with my ever-so-helpful sister about the Paleo lifestyle and way of eating that I was really intrigued. I read blogs about different people’s experiences with weight loss, physical health improvements, and even mental health improvements. I was still skeptical. Looking back, it wasn’t skepticism at all, that was just an excuse. What was really happening was the fact that I didn’t want to leave the food I was eating behind because it made me feel good when I ate it. I started my lifestyle change on Monday, September 9th, 2013. The night before I binged on Culver’s, and I mean binged. I am just shy of hitting my three month mark with changing my lifestyle and once again, I don’t even know where to start. I don’t have any more migraines. Like none, zip, zilch, zero, ever. As I am writing this I am feeling very emotional because my migraines were literally the worst thing in my entire life. They were absolutely awful and now they are completely 100% gone. After 30 days of this lifestyle change, I realized that I had not had all but two migraines. After the 30 days I had none. I also noticed that my energy levels were increasing- slowly but surely. Sometimes I work over 12 hours a day and I remember I used to actually want to take a nap at my desk because I was so exhausted. Now, I wake up feeling refreshed and ready for the day and can function normally for that 12 or 13 hours of work. My sex drive is back (sorry for TMI). My appetite is back to normal, normal meaning I don’t want to eat 24/7 anymore. I actually get the feeling of fullness and I actually feel like I have nourished my body after a meal. I fit into my clothes now; they are actually getting loose on me. The bloating in my stomach has gone down completely and I am able to lie down on my back and actually see my stomach go down as it should. My stomach is not hard anymore and my muffin top is slowly going away. The swelling in my feet and ankles has gotten so much better than it used to be, it still happens once in a while but I can definitely attribute that to sitting at a desk for 12 hours in a day. I don’t have anymore joint pain at all. My knees and feet don’t hurt when I walk anymore. My skin is extremely clear and I rarely break out or get a pimple. My nails are hard as rocks and no longer break or peel. My gastrointestinal issues are completely gone and no more IBS (pshhh, thanks doc!). Oh, and also, I have lost 16 pounds. That is by far not the most important thing to me right now, so that’s why I mention it last. It is great to be able to say that I have lost weight; however, it’s even greater to be able to say I have improved my health.

I would say what got me started on this journey was all of the physical health issues I was having and honestly just wanting to feel better. I literally woke up one morning and packed up everything in the kitchen that was not “Paleo” or “healthy” for me and said goodbye. I said goodbye to rice, flour, cereal, bread, buns, biscuits, pancake mix, ketchup, and all the other foods that are packed with ingredients that I cannot pronounce. I went grocery shopping that week and bought some staples and went from there. What really helped me is Nick, my boyfriend, and the fact that he was willing to also change his lifestyle (besides drinking milk and the occasional Monster energy drink). He has been a huge support and I don’t think that I could have made these changes without him also being on board. Our kitchen looks completely different now. We don’t even have enough counter space for all of our produce and barely enough freezer space for all of our grass-fed and pastured meat. I agree with what my sister says about finding what is right for you and what works for you. I eat dairy, in moderation, but it is all high quality, raw and unprocessed dairy, so I am being cautious and careful with the choices I make when it comes to what I am putting into my body. Nick and I will indulge in the occasional gluten-free pizza and I never have a bad reaction to it, but I know that it still isn’t as healthy for me as it could be and that by eating it I am not nourishing my body the way it needs to be, but it is a nice treat once in a while. I guess I wrote this for any other “skeptics” or excuse-makers out there like me. I am still a fat kid at heart but now I am eating the right sources of fat and I’m loving it! I think you really do have to get to your breaking point before you make a change like this. If I hadn’t been having all of those physical health issues I would probably still be eating the way I used to. Those issues were my body’s way of saying “Hey, cut the shit Shelby. I want real food!”

Now when my co-workers ask me why I’m not having a bagel from Panera or indulging in the endless treats that everyone brings in, I tell them that I choose not to eat those things. That response is followed by more questions about my lifestyle and what I DO eat. I get a lot of “you don’t eat bread?!”, “what do you eat?”, and “CORN IS NOT A VEGETABLE?!” This is my main reason for writing this, because I can’t answer those questions in such a short period of time. The changes that I have made are much more extensive than just not eating bread anymore and I made changes for many more reasons than I am able to state in one sitting. So, here’s one long, drawn-out answer to why I changed my lifestyle and why I eat the way that I do.

I’ve done a lot with eggs, but I’ve never topped a salad with one! The inspiration came from a newer restaurant here in San Diego, 100 Wines, from the Cohn Family Restaurant Group (one of our favorites), view the amazing menu here: 100 Wines Menu. They’re very accommodating with gluten-free, grain-free, etc. and willingly substitute breads/pita for crisp vegetables, or will remove ingredients you can’t eat, etc.

I met a girlfriend for dinner there and I enjoyed the Mixed Greens salad: poached egg, crispy pork belly, ciabatta crouton, piquillo, peppers, ginger apple dressing-sans the ciabatta crouton of course 🙂 It was fabulous! I can’t believe how awesome the yolk was mixed in with the salad. I told Seth about it, and he made this one night recently!

You can use any burger patties you choose, seasoned however you want, and same goes for the salad and it’s ingredients-be creative. Make the salad, top with burger, bacon and poached eggs. Mix altogether-the key is a little runny yolk, it flavors the salad so well! 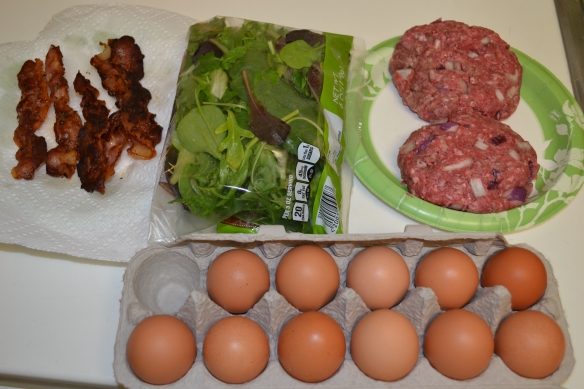 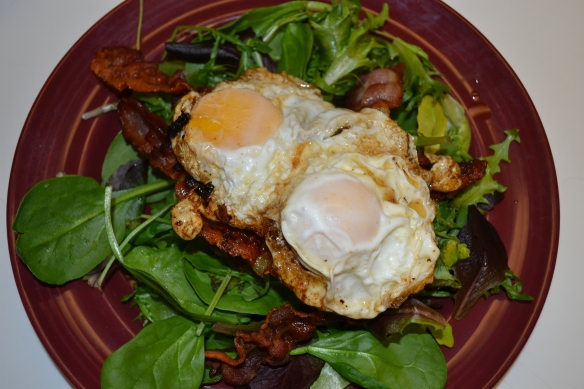