Like that? I tried to get creative with the name, nana = banana, punkin = pumpkin.

As I dabble more in baking in the Paleo realm, I’m learning which ingredients to adjust at different times, etc. It’s fun, but trust me, things don’t always turn out well!

Pour into loaf pan oiled with coconut oil, and bake for about 40 minutes at 350 degrees. 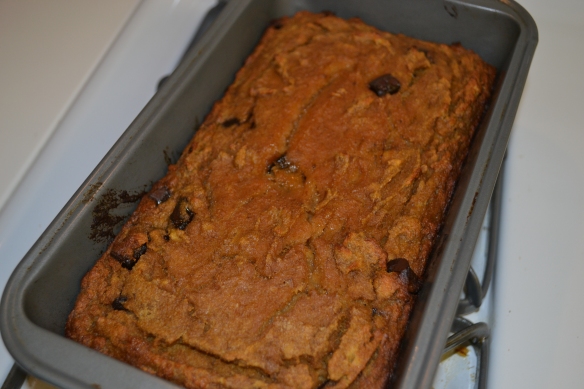 Things I’ll change next time I make it (and I WILL make it again): I will use 1 less egg, and a 1/4 cup more coconut flour. Also, adding chocolate is rare for me, but if I’m going to, it’s going to be Enjoy Life.

This recipe was adapted from the Civilized Caveman’s Paleo Banana Bread. In the interest of Auto-Immune Protocol, I eliminated the nut-butter and replaced it with the pumpkin and an extra TBSP coconut oil. I also removed the baking powder as I haven’t found one I like that doesn’t contain corn. The only thing I measured was the baking soda.

P.S. Last night, I prevented a low blood sugar with a slice of this warmed up and a drizzle of raw honey 🙂

Tell me what you think! Cancel reply